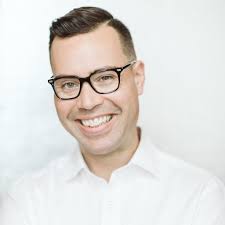 This podcaster needs no introduction, but here it goes: I got to talk to Jordan Harbinger about The Jordan Harbinger Show, its ranking as one of Apple’s most-downloaded podcasts of 2018, Jordan’s move from life as a Wall-street lawyer to top podcaster, and all the other joys and wisdom that come with over a decade in podcasting. Now let’s get to the rest of the story because, trust me, it’s more than worth the read.

Many years ago, Jordan Harbinger was a Wall-street attorney with a deep fear of getting fired and the idea that if he managed to maintain a lot of distance from his bosses he could hold on to his job a lot longer. “I figured if I could work from home it would take them longer to figure out I don’t belong,” he explained. In a failed attempt to work from home, Jordan learned that one possible solution to his problem would be “creating relationships for the firm and bringing in deals.” There was a bit of a problem though, Jordan wasn’t sure how to build those kinds of connections. It was time to start studying.

Jordan needed to learn fast, but he said that “what [he] found was that there was no class for networking that’s worth anything.” Everything Jordan found told him to attend a mixer, introduce himself, get a business card, and follow-up later. But, Jordan explained, “If someone’s not giving you a million-dollar law deal or job offer it’s not because you didn’t get their card and have a firm handshake and follow-up, it’s because they don’t like you.” Jordan decided that the key to  business relationships was getting people to “know, like, and trust you.”

He began developing the different facets of each of those pieces. “I started taking all these classes on what these individual things were.” Jordan studied things like body language, charisma, confidence, vulnerability, emotions, and trust, each as little bits of the three keys. He learned a lot really quickly and found that, when he applied what he was learning, it worked. So, naturally, he started telling people all about it: first in bars with other law-school students and then by burning cds of his own recorded content. Jordan consistently found that people were hungry for this kind of content and wanted to successfully network in their business life, but he was about to discover two things that would change the game entirely.

Into the World of Podcasting

The first thing that redirected Jordan’s trajectory was realizing that there is one thing people want more than success in their career: a date. “So we started to apply this stuff to dating and to work,” Jordan explained, and they saw an immediate rise in interest and consumption. Being “known, liked, and trusted” meant you were relationship material, as it turned out, but it was time to let people know that a little more efficiently than through the cds Jordan was using. He told me, “My friend was like, ‘hey, have you heard of podcasts?’ and I was like ‘no, it’s 2006, what’s iTunes?’”

Knowing nothing about podcasts didn’t stop him, and Jordan switched from recording mp3 files to making his own podcast and working hard to promote it. Of course, when the iPhone came out and podcasts were made freely available, “those blew up and we were kind of riding that wave.” Combining dating and business networking and switching to podcasting led to “a viral, twelve-year overnight sensation.” The level of success Jordan has achieved is at least partially connected to the fact that he didn’t start off wanting to make a show.

As the medium has grown and become profitable, more and more people are interested in starting their own podcast as a revenue stream, at times simply creating a show with whatever content they think will draw the largest crowd. “You should be bursting with content that you need to get out and this is your medium, not ‘gee, I like this medium let me figure out what I’m going to say,’” Jordan said. Ultimately, an idea should drive the show because it’s great ideas that make great podcasts.

Jordan would know all about that, because he had an incredibly successful show. But things change and, after eleven years of massive success, Jordan is rebranding. He recently launched a new show and is excited to invite old fans and new listeners alike to check out The Jordan Harbinger Show.

Think back to around a minute ago when you read about the beginning of Jordan’s journey. It started with him wanting to learn how to network, but his thirst for knowledge existed way before that moment. When Jordan decided to start a new show he wanted to highlight “the idea that consistent learning was always a huge advantage, and that most adults had actually stopped learning more or less.”

Learning has traditionally either been incredibly time-consuming (reading lots of books and articles) or boring (listening to a monotone professor lecture for an hour or two). As a lifelong learner himself, Jordan “wanted to change that model. Learning can be fun, it can be entertaining, and focused, intelligent conversations can take the place of boring lectures, textbooks and the like.” Jordan facilitates those conversations through long-form interviews in which he “finds people who do great, amazing things and make them accessible.”

If you’re wondering what kind of people he interviews, let me provide a brief sampling of recent guests.

The Jordan Harbinger Show has talked to pretty much everyone. Jordan wants to “deconstruct what [his guests] do” so that his listeners can “get better at what they’re doing” instead of assuming greatness is unattainable.

Of course, there’s a lot of joy in releasing great, educational content, but Jordan also uses the interview format because it’s a lot of fun. When I asked what his favorite part of making the show was, he responded “I basically get to call up any person that I’m interested in and be like ‘hey, I want you to answer all of my questions about anything that I want for an hour and a half uninterrupted.’” He went on to say that “you can’t buy that kind of experience,” but hosting a podcast means people are more than willing to sit and talk about pretty much anything, and Jordan loves it.

For all the amazing doors podcasting can open, there are quirks and things to learn with every medium, and Jordan didn’t mind expanding on some of those as well.

Not Perfect, but Still the Best

When I asked Jordan about the most difficult part of podcasting, I figured I wasn’t going to get the usual answer of editing or marketing. I mean, he’s been in the industry for over a decade, so he’s got that stuff down pat. But what he did cite was something that podcasters are running up against in every corner of the industry, and something we are all hoping to see changed as soon as possible: “You have to educate the market.”

Jordan was referencing the fact that podcasting is not as easily accessed by listeners as other forms of media. He used the example that “you can text your grandma a YouTube link and she can click and watch and it’s done.” Where YouTube has become a natural form of media for us to consume, podcasts require more work and are less easily discovered, leaving non-podcast listeners asking things like “how do I get [the podcast]?” Jordan explained. Of course, the hope is that Apple will put serious effort into fixing the problem or a competitor “like Spotify or Himalaya will make podcasts more accessible to many less tech-savvy types.”

But the negatives don’t outweigh the positives by a long shot, and Jordan mentioned that podcasting is better for the Creator both in terms of monetization and especially content sharing. “People subscribe and they get every episode. They stay loyal and they’re spending an hour with you. If you’re on YouTube and you get people to spend more than thirty seconds with you, you’re a sensation.” Jordan knows that building an audience takes longer on podcasting than it would on YouTube, but it suits his content better, lets him do what he loves – helping people learn – and is going to let him do just that for a long time.

Jordan is excited about a long career in podcasting, telling me “This is a type of content that, even if people are like ‘we’re canceling podcasts and not doing it anymore’… It just won’t happen. Talk isn’t going anywhere and it literally never will.” Jordan isn’t “worried about it going away or becoming obsolete” because podcasting is “creative, fulfilling, lucrative, and fun.” Everything is in podcasting’s favor, and Jordan is excited to watch the medium grow.

More personally, Jordan is really enjoying watching the numbers for his new show rise. “Our growth curve is kind of off the charts,” Jordan said, citing both new listeners and fans who have followed him over from his previous show as the reason. Jordan is incredibly grateful to his fans and said “I have a really tight relationship with fans. They write in, use social media, email, etc to stay in touch.” Podcasting allows fans to feel close to Jordan, and when they reach out to him he feels the same way.

There’s a lot coming in the future of The Jordan Harbinger Show, so if you love hearing about phenomenal people, want to learn more about how to be great yourself, or just want to see what all the hype is about, it’s time for you to give the show a listen. And be sure to leave a rating and review to let Jordan know what you think!

Behind the Streams is a new series by Podchaser that explores popular podcasts and the brilliant minds behind them. Email Morgan ([email protected]) to tell her why your favorite show should be featured next.