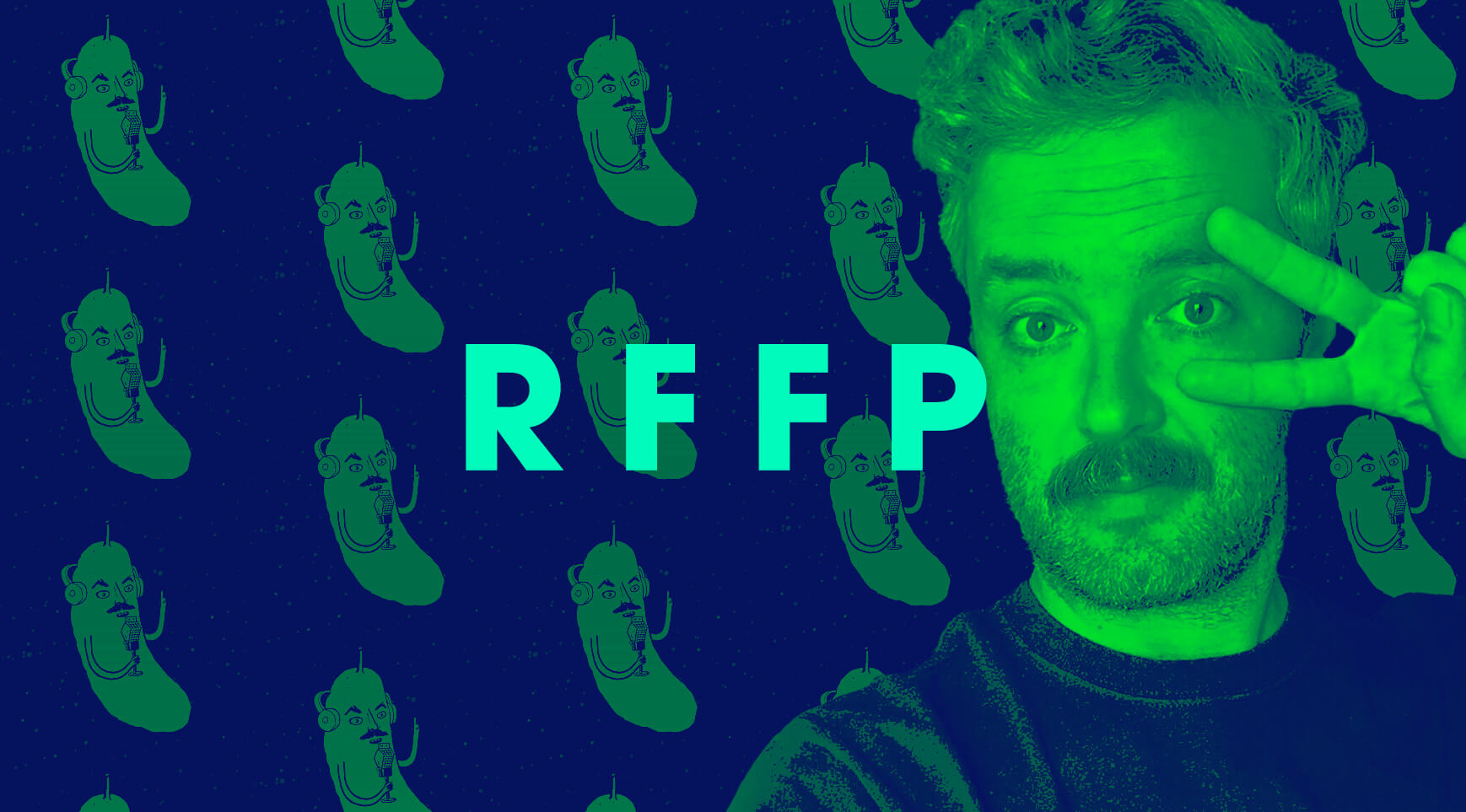 Jumping into the Phantasmagorical Brine of ‘Richard’s Famous Food Podcast’

I’m here to tell you that one of the most boundary pushing technical achievements of narrative podcasting in years is… a culinary comedy podcast? Yes. And it’s called Richard’s Famous Food Podcast. Let me explain:

There’s two elements that are fundamental to any piece of art: Content and Form. Mona Lisa is the content, oil paint is the form. Narrative podcast form originates almost entirely from This American Life. Think of the gentle voices, the slow pacing, signposts, dramatic pauses, and instrumental swells towards the climax of the story. Since This American Life’s first episode in 1995 (on the radio), nearly every successful narrative podcast has borrowed their form. 99% Invisible, Against the Rules, Revisionist History, etc. This is not inherently bad. Many masterpieces have been created with oil paint.

But Richard’s Famous Food Podcast is not oil paint. It’s more like a silly string sculpture of a famous battle – clearly ridiculous, but weirdly informative. We got the chance to interview its eponymous creator, Richard Parks III.

What is Richard’s Famous Food Podcast?

On paper (and only on paper), RFFP is traditional food journalism. Episode 1 is called “Bone Broth”. Richard describes how to make bone broth and interviews a Los Angeles pho restaurant owner about how bone broth is undervalued. You can already visualize the episode in your head – but you’re wrong. In reality, “Bone Broth” sonically cycles through cartoon channels. Every few seconds you’re presented with a new wacky character, charming original song, onomatopoeic sound effect, or fake commercial for “lonely eating.”

Over the course of RFFP’s 13 episodes thus far, Richard and his cast of characters delightfully discuss Christmas pickles, chamoy, natural wines, and eating bugs. RFFP  has also successfully wormed endless catchphrases into my psyche (“ANNYYWAAYYSS”, “Peeklay”, “Why does anybody do anything?”).

These episodes are short, but they never feel that way. From the jump RFFP is pushing the limits of absurdity. You hear a jaunty theme song by Bobby Halvorson that Richard describes as an, “over-eager barbershop quartet.” The song just barely gets a chance to end before Richard’s playing 5 more meticulously layered sound effects and voicing his fake nephew Jimmy. He’s onto the next joke before you could fully digest the last one – and that’s only because there’s so much to chew on.

According to Richard, this is very intentional, “I try to keep it to what’s essential to the story I’m telling and move on. I don’t want to waste your time. I strive to be more deep than wide.”

Who is Richard Parks III?

So what kind of man would spend three whole days perfecting a one minute combination of “Sicko Mode” and fungus facts? Turns out, someone who’s both experienced in food journalism and comedy.

On the journalism side of things, Richard is co-author of Guerilla Tacos Cookbook and The Boba Book (out April 7th from Clarkson Potter / Penguin Random House!), and a James Beard award nominated writer for the now defunct food magazine Lucky Peach. Not only has he written for the comedy website McSweeneys, but he also created an “hour-long musical radio drama with the Flaming Lips for McSweeney’s and KCRW, where Wayne Coyne noticed a face-shaped growth in his leg, and I was the reporter on the scene covering this as a breaking-news story.” All in the style of, “a weird update of Orson Welles’ War of the Worlds.” Spoiler alert, the rest of the Flaming Lips show up and sing to the face.

Richard is also a documentarian, who’s worked on numerous projects including the Emmy-nominated, “The Ballad Of Esequiel Hernández.”

One thing that Richard wasn’t experienced in is podcasting. He was assisted by a sound designer on the Flaming Lips project, meaning that everything on Richards Famous Food Podcast is self taught. He says that he never intended to be a sound designer because being a sound designer is “way too much work on a project as densely layered as RFFP.”

It’s hard to pin down the podcasting lineage of Richards Famous Food Podcast. There’s no podcast quite like RFFP, so where did this wondrous mishmash of ideas come from?

Surprisingly, RFFP’s concept began as a combination of Lucky Peach’s quirky attitude and Serial’s production polish. With these two things in mind, Richard crafted the first episode and it didn’t go as planned, “I was just trying to make a well-produced food show. Then it came out sounding like Richard’s Famous Food Podcast, which I couldn’t have really predicted. I just went with it.”

Since its creation in 2015, two more inspirations have become apparent: inside jokes and cartoons. Richard’s favorite childhood cartoons – mainly Warner Brothers and the Simpson – have been coloring his phraseology for years now. Many of the show’s joyful mispronunciations and “boy-yoi-yoing” sound bites have been well known to Richard’s friends and family long before the podcast. “I never aspired to be a host of anything or a front-man of anything, but now that I am, all that stuff comes to the fore.”

But like… why a gastro-comedy podcast of all things?

The show doesn’t feel “important” in the traditional sense, but Richard finds that motivating. “I’ve noticed that the moment I start to think of something as ‘important’ I’ve handicapped myself. Sometimes there’s no coming back or I get really stuck. So I try to think of RFFP as supremely, completely, unimportant. It doesn’t mean that I care any less about it or work any less hard. Maybe the opposite.”

But that doesn’t mean that Richard finds food to be unimportant – he has co-authored two cookbooks after all. With media like Lucky Peach and Salt Fat Acid Heat, food storytelling has reinvented itself in recent years. Richard noticed that food podcasts weren’t following this trend. They’ve largely maintained the form of public radio. Richards Famous Food Podcast brings food media into the internet age, rebelling against those traditions and standing apart because of it.

How the Sausage Gets Made… So to Speak.

Every episode starts at the beginning. Richard starts strong with a dense euphonic freight train of delight. He then asks himself, “How do I make the rest of the show sound like it’s not totally dead in comparison to that?” Every decision is predicated upon maintaining the momentum. The show is not allowed to slow down, only change direction.

But wait there’s more! Besides the theme song (composed by the incredible Bobby Halvorson) and season 1 finale, Richard writes and records much of the music for the show. He’s used guitars (both electric and acoustic), piano, mandolin, live drums, and synth beds and beats. Richard cites the overwhelming amount of work that went into every song in “Bone Broth” as the determining factor for the initial 2 year hiatus.

Following traditional podcast etiquette, Richard has decided to begin the second season 5 years into production. He’s got big plans! Collaborations with elite podcasters like: Ian Chillag from Everything Is Alive, Avery Trufelman from 99% Invisible, Articles of Interest, and Nice Try!, and David Weinberg from Welcome to LA.

Richard also aspires to expand the RFFP universe beyond podcasting. He’s excited about the possibilities of live events, children’s books, cook books, an album, and a Pee Wee’s Playhouse-esque TV show. Why would he want to create even more work for himself? Why does anybody do anything? “It doesn’t make any sense and nobody’s doing it but that’s why I know it’s right for me.”