Episode from the podcastDiscover Library and Archives Canada
Next Episode 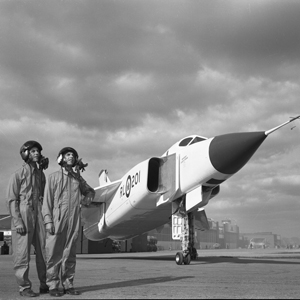 With the creation of the A.V. Roe Canada company following the Second World War, Canada became a leader in the aerospace industry. The company developed the C-102 jetliner and the CF-100 Canuck, the first Canadian-designed military fighter aircraft. In 1953, at the height of the Cold War, the Royal Canadian Air Force (the RCAF) commissioned A.V. Roe to design a new plane: a supersonic jet that could engage and destroy enemy interceptors before they reached their targets in North America. That supersonic jet was the Avro Arrow. It was intended to serve as the RCAF’s primary interceptor, and was one of the most advanced aircraft of its era with the potential to establish Canada as a world leader in scientific research and development. Unfortunately, the project was ultimately cancelled.

In part two of this two-part episode, Palmiro Campagna talks about the cancellation of the Avro Arrow project and some rumors surrounding the aircraft.

1
The Discover Library and Archives Canada podcast is where Canadian history, literature and culture await you. Each month, we will showcase treasures from our vaults, guide you through our many services and introduce you to the people who acquire, safeguard and make known Canada’s documentary heritage.