Episode from the podcastLinkedIn Ads Show
Next Episode

How to Create High-Performing LinkedIn Ads

It's fortunate that this week's episode is all about creating the perfect ad, when we also get to reveal the 3 winning ads in our performance contest! We had so many incredible submissions, showing us examples on how to be rockstar marketers on LinkedIn.
Here were the winners (in no particular order because they're all rockstars) along with their high-performing ads and landing pages: 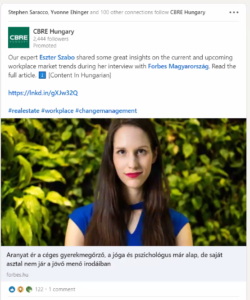 Why so Amazing?
LinkedIn's average Click Through Rate for Sponsored Content is ~.4% and Cost Per Click is in the $8-12 range. That's why getting a CTR that was 14 times higher than average is excellent. With a CTR that is 14X the average, paying by CPM, Zoltan found himself paying a tiny fraction of what competitors would be paying.
It's targeted to an audience who had already been really responsive on a past campaign, so he knew he was setting the company up for success. It's an organic company Page post that he boosted, so it had good social proof from the start, which helps. It also leads to an article on Forbes Hungary, which helps increase trust.
Not only did he find that the article was getting tons of cheap traffic, but he also noticed ~35 new followers from the effort over a short period of time.
Well done Zoltan! 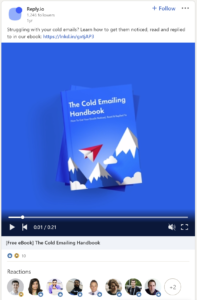 Why so Amazing?
We call any offer on LinkedIn that gets over a 15% conversion rate a "Rockstar Offer." Alex ran this video creative(traditionally harder to get good performance from) to a cold audience, with an external landing page (think of how much higher the conversion rate would have been if it were a Lead Gen Form Ad), and on top of that, they required a Business Email, and it still got a 62% conversion rate!
It pushed 65 unique downloads, plus a couple of view-through conversions for good measure. Obviously the high conversion rate has so much to do with the offer and the landing page, so check that out here: https://reply.io/cold-email-handbook/
Nice Work Alex! 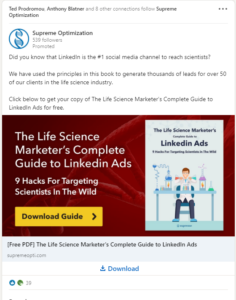 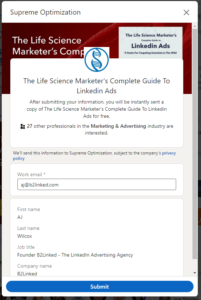 Why so Amazing?
We would have guessed that the highest-converting winner would be through a LinkedIn Lead Gen Form ad (On average, they convert 10-50% better than landing pages) but this blew us away.
This is a 65% conversion rate, on an ad and offer that has been running for 7 MONTHS now to a cold audience! Most ads on LinkedIn wear out their audience after ~1 month, but this ad/offer is like a fine wine and performance has actually continued to improve over time. UNHEARD OF!
On top of the leads it generated, it also drove 9 CONVERSIONS, which is likely from viral signups that wouldn't have been served the Lead Gen Form.
Eric, you slayed it!

Conversion Rate 325%!
When we saw Lindsay's submissions, we had to take a double-take. It's ultra-rare (I dare say, impossible) to get a conversion rate over 100%.
When we looked into it, we found it was a Text Ad, and the vast majority of the conversions were view-through conversions. Ok, so you might say "LinkedIn wasn't responsible for those conversions since they were view-through," but this is a testament to me that Lindsay's team is targeting the right audience across multiple channels. The huge amount of view-through conversions on Text Ads (which show a ton of impressions) is proof that her other channels are targeting excellently and we see those reflected in LinkedIn's metrics.
Thanks for teaching us Lindsay!

Here were the resources we covered in the episode:
DRIVE Sales: The 5 Secrets to Increase Your …

21
The LinkedIn Ads Show is your source for news, how-tos, and insights about the LinkedIn Ads platform. Hosted by LinkedIn Ads expert and partner, AJ Wilcox, you'll get up-to-date, actionable advice, as well as occasional interviews with LinkedIn's product that will make you a LinkedIn advertising rockstar.
Do you host or manage this podcast?
Claim and edit this page to your liking.