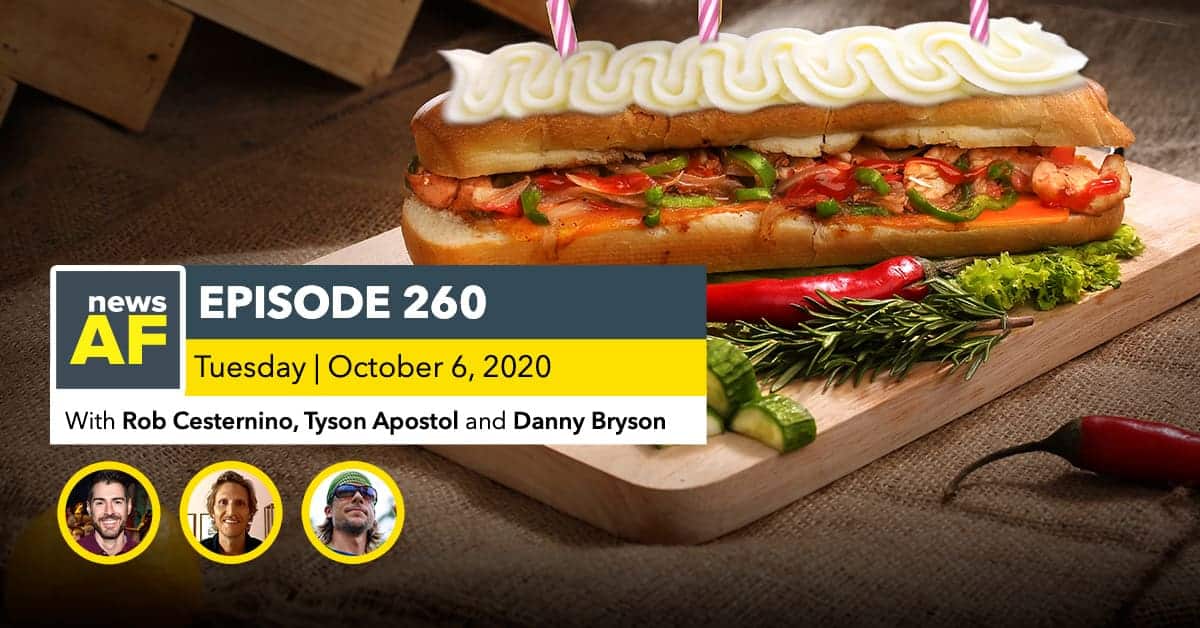 Your most trusted news team is here to bring you this week’s most interesting news on October 6, 2020. As always, your actual factual reporters, Rob, Tyson, and Danny, are here break the Internet’s craziest stories. Subway “bread” takes the cake for this week’s top report – as in literal cake. Irish courts rule that the sugar content in Subway “bread” is too high for it to legally be considered bread. The News AF team breaks down that story, along with other breaking news from the first week of October.
What’s your go-to Subway order? Share your opinions with us on Twitter by tagging @RobHasAPodcast and using the hashtags #RHAP and #NewsAF
For more breaking news, be sure to follow Rob, Tyson, and Danny on Twitter as well:
Rob (@robcesternino), Tyson (@TysonApostol), Danny (@dannybryson)
Need to catch up on more Actual Factual news?
News AF | Fake Private Jet Stage for Influencers i…
News AF | 7-Hour Flight to Nowhere is News AF – Se…
News AF | Dismemberment Insurance Fraud is News AF…
News AF | Real Life Willy Wonka is News AF – Sept …
News AF | Peanut Butter for Breakfast is News AF –…
News AF | Early Pumpkin Spice Latte is News AF – A…
News AF | Recycling as a Deal Breaker is News AF –…
Stay up to date:
Watch News AF on Twitch
Subscribe to News AF on iTunes
View the News AF Archive
News AF on Youtube
Group AF Facebook Page
The post News AF | Subway “Bread” is News AF – October 6, 2… appeared first on RobHasAwebsite.com.

Rob Cesternino from Rob Has a Podcast (RHAP) talks with 3-time Survivor, Tyson Apostol and Danny Bryson about actual factual news stories from the internet. NewsAF is recorded live on Mondays.