Episode from the podcastSarika D. Mehta » Podcast
Next Episode 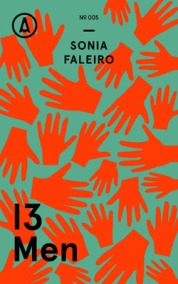 Sonia Faleiro is a journalist and author of 13 Men, which investigates the brutal gang rape of a tribal woman in West Bengal, and the complex political intent involved in the story. She is based out of London and has written extensively on women’s rights, global violence against women and other related issues. She has previously appeared on KBOO, when she was a guest on APA Compass to discuss her book, Beautiful Thing: Inside the Secret World of Bombay…. Sonia is also a co-founder of Deca, a global journalism cooperative that creates long-form stories to read on mobile devices.

This story comes in the wake of the 2012 Delhi gang rape and after the release of the related documentary, India’s Daughter. In fact, Sonia reviewed the film and published an interview with the film-maker. The complexities of gender politics, social class, caste and power all come into play in her brave investigation of 13 Men. Sonia is the only journalist who had full access to the rape victim, whom she calls Baby, and the community members (including the accused 13 men) involved in the act. It’s a difficult tale but brilliantly written, and it keeps you captivated.

We met on Skype and she told me about these stories, her thoughts on the documentary and its presentation.

We also talked about the challenge behind writing such difficult issues and the responsibility we have, those of us with access to media, to tell these stories. I say this because – while this wasn’t a part of our interview – it’s something I’ve admired about Sonia and her work, and something I struggle with very personally.

This interview was featured on my new show, Intersections Radio. Check out the podcast!

https://sarikadmehta.files.wordpress.com/2015/09/s…
You can also listen to the full broadcast and read the transcript!