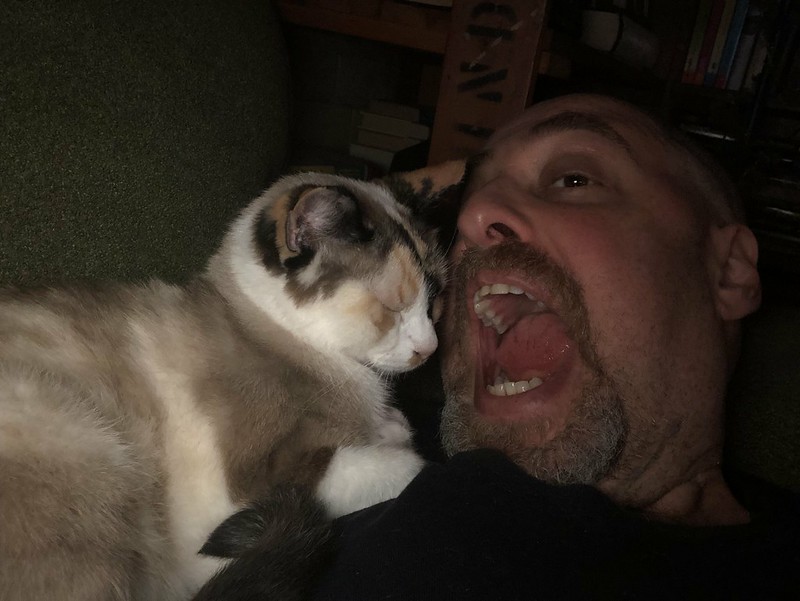 RICHARD
Wordy
After years of failing to succeed in business, with women, or even to build proper friendships, I decided to see an image consultant to try and change my luck.
After just one session, he said he had me all figured out. It was my body language, he said – “It’s just far too words – your voice says one thing but your body is all over the place”.
This, he said, was the root cause of my problem – and, with practice, I could fix it.
I protested, but he was having none of it.
That’s Tourette’s for you. Fuckwit!
SERENDIPIDY
“Any last thoughts?” I asked, then as he opened his mouth to speak, I gave him a hard stare, “Don’t make it too wordy, I haven’t got all day!”
He looked deflated, understandable really. Most of us would like to leave this world with something worthwhile quoting; but death tends to surprise us, making it tricky to prepare a fitting last utterance.
As for this guy, he knew exactly when his time was up, but having me telling him to get a move on certainly wouldn’t help his mood.
Like all of them, his last words would only be terrified screams.
TOM
Having Kissed the Stone — Wordy O’Brien had nearly graduated from Trinity College. Of course on one there called him that. He got that moniker when he ran with Mike Sullivan’s Dusters. T’was the blarney that caused his timely exit from Trinity. One might say pillow talk with the Chancellor’s daughter put the flame of fee to his feet. I think it t’was the result of a savage beating leveled during a school wide debate with the Marquis of Ravensguard. Pissing off semi-royalty while immensely satisfying is always costly in the end. Wordy was wordy cus his words had keep him from the multiple nooses.
JON
Why Kill a Mockingbird?
By
Jon DeCles
He sings like a bird, a loud bird, a bird on a branch in public, and because he is singing things that someone does not want to be heard by all those around, that someone thinks that he is being mocked, which is only marginally true: the bird cares not the content of his song, he only sings what he sees, what he discovers, what he roots out of the dirt at the base of every tree. Like any mockingbird, he repeats the songs that other birds have sung. Birds do not trumpet truth filtered by discretion, they just sing.
Politics Leads to Drink
By
Jon DeCles
Mark Twain said: “I am a political mugwump. My mug is on one side of the fence and my wump is on the other.”
The Queen of Hearts discovered an effective way of separating mugs from wumps, but that left a very wide aisle in parliament, with no possibility of a meeting ground between the two ruling parties (the Red Rose Party and the White Rose Party) and that inevitably led to the War of the Roses.
As for me, I tend to sit my wump down in a chair, put of mug of porter on the table, and drink.
NORVAL JOE
Billbert met Linoliumanda for lunch and could tell from her dark expression all had not gone well.
She frowned even deeper opening her lunch bag. “Can you believe Mr. Ziegler said my Harry Potter report was too wordy? It was an oral report. How can an oral report be too wordy?”
Billbert shrugged. “I don’t know. How did it compare in length to the other reports?”
“Other reports?” Linoliumanda asked. “There weren’t any others. I took the whole class time.”
Billbert bit the side of his cheek and nodded his head. “Yeah. I can’t see how he’d call that wordy.”
PLANET Z
Remember that old Twilight Zone episode where the Talking Tina doll says all kinds of scary things?
Well, my friend Tina talks a lot and she says all kinds of scary things, too.
I used to joke that they wrote that episode based on Tina.
But that’s absurd. That show was long before Tina was born.
Unless Tina is actually from the Twilight Zone, and she can travel in time and space.
Why is it a doll in the show?
Because back then, a person saying those things would have been too scary.
So they wrote her as a doll.
Rate Episode

1
A 100 word story every day until the day I die.
Do you host or manage this podcast?
Claim and edit this page to your liking.