Episode from the podcastThe RPG Academy
Next Episode 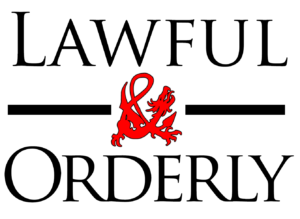 Welcome to Lawful & Orderly: Special Visions Unit!
Lawful & Orderly is a light-hearted fantasy police procedural set in the magical city of Lan Arcanym. Lawful & Orderly is played using D&D 5th edition, but the rules come second to the story. Each episode is broken into two parts, but you don’t need to have listened to any other episodes in order to follow the story. We follow the detectives of the High Guard as they (attempt to) solve crimes.
This series streams every Monday at 8:00 pm EST on our Twitch channel: twitch.tv/TheRpgAcademy. If you tune in for the live Twitch stream, you can be a member of our jury and determine the outcome of our cases! The audio for this episode was pulled directly from the Twitch stream, so it may not meet the standards you’re used to. You can also watch this episode in full on our YouTube page.
Our GM for this episode was Jeffrey Copeland, and our players were Scott Brown (as Illyn Brownfeet and Bark the dog), Marty McGuire (as Aaron “Tweet” Twillson), and Andrew J. Young (as Mikhail Pavlovitskivich).
Follow Lawful & Orderly on Twitter: @DnDSVU.

Comments and Feedback are always welcome.
E-mail us at Podcast@TheRpgAcademy
Follow us on twitter @TheRpgAcademy
Visit our Facebook Page
Join our Google+ Community Page at: The RPG Academy
Support our show by becoming a Patron at www.Patreon.Com/TheRpgAcademy

52
Faculty Meeting is the general advice, discussion & game theory podcast content of The RPG Academy website. This is where we discuss issues and ideas from our game table or yours. We also have a series of long form Actual Play Podcasts under The Campaigns title. When we try out new games those are called The Trials and our newest one shot just for fun shows are called Field Trips. We also do interview shows called Show andTell and on occasion have done some movie reviews called Movie Day. Follow the show on Twitter: @TheRpgAcademy and LIKE us on Facebook: www.Facebook.com/TheRpgAcademy