Episode from the podcastthespeakpodcast
Next Episode

Released Monday, 12th March 2018
7 people rated this episode
About
Reviews
Creators
Lists
We sat down with some friends from Four Day Ray and The Pint Cycle at FDR Brewery in Fishers. We in the tap room on kegging day (if you're wondering what those noises are), and we gained some additional education and insight in to traditional Irish beer styles just in time for St. Patrick's day!

This is the first episode in our new Beer Education Series. Come learn with us! We cycle through a few beers in this episode. The first two are red ales: FDR's Kingstown Irish Red followed by Boulevard's Irish Red. The Four Day Ray beer is a little closer to the style with some added rye, and the Boulevard is a unique take on an Irish Red.

We then try Guinness's relatively new, Rye Pale Ale and wrap things up with a Mofo Risin' Stout. We learn about some of the history of Irish style beer, what SRM's are, the best beer to sneak in to the new #BlackPanther movie, and that Hutch calls those who ride The Pint Cycle "passengers."

Be sure to stop by Four Day Ray on March 16th and 17th and celebrate St. Patrick's Day for their, "Firkin St. Patrick's Day" event. Also, if'n you're in to whiskey - and more importantly, local whiskey, check out their "Whiskey Beer and Bites" event with West Fork Whiskey on March 15th. 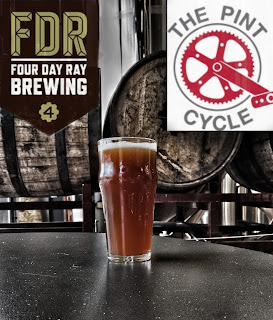 beerSt Patricks DayIndiana craft beerIrish Style Beer
Do you host or manage this podcast?
Claim and edit this page to your liking.