Episode from the podcastVampires of White Chapel
Next Episode 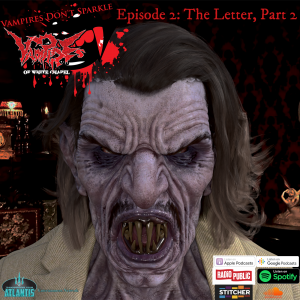 Allister is shocked to learn the monster he has become as Jack reveals more truth about the Vampire life. Arianna begins her search for the serial killer known as Allister The Annihilator.

Featuring the Music by Midnight Syndicate

Sound FX from FreeSounds.org and utilized under the Creative Commons 0 License and also Audioblocks.

Find out more about Vampires of White Chapel at http://vampiresofwhitechapel.transmissionsfromatla…

Support our Patreon at http://patreon.com/TFAEntertainment

214
A full-cast Horror Audio Drama. Vampires of White Chapel follows the story of three vampires, Allister Connacher, Arianna Grayson and the infamous Jack the Ripper. These vampires take you into their dark world, how they were made as they are and how they cope with what they have become.