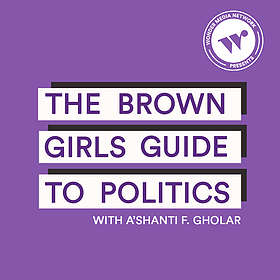 Brown Girls Guide to Politics: A Podcast That Inspires You to Run for Office

Political coverage – in both podcasts and more traditional journalism – tends to be reactionary. The hosts wait for something newsworthy to happen, and then gather for a roundtable discussion. They talk about the future, but only through speculation.

But politics isn’t speculation, it’s about actually improving in our country and communities. There’s a simple reason why our discussions are more reactive than proactive. It’s easy to talk, but putting your money where your mouth is takes work. I too find many of my personal political discussions to be more bark than bite. It’s difficult to enact change, but if I decided that I actually wanted to run for office, it’s easy to find inspiration. As a cis white man, political role models are abundant. I can leverage these role models to learn how they became leaders, or just outright mimic their tactics.

While the most recent election resulted in the most racially and ethnically diverse House of Representatives ever, people like me are still the norm. If you are from an underrepresented community and want to further your interest in politics, where do you go?

This is the question that A’shanti Gholar struggled with “one early morning” in 2018. Her solution: start The Brown Girls Guide to Politics, a blog “that featured myself and other women of color who could support these women by sharing our stories, journeys, and truths about being a woman of color navigating politics.” A’shanti says that the blog quickly found a strong readerbase, allowing her to launch the BGG podcast a year later.

A’shanti was the rare child who found her passion for politics through CSPAN. Despite her early fascination, she says that her “love of politics didn’t really come out until high school due to my great government teacher Mrs. King, who encouraged us to get civically engaged.” Mrs. King’s motivation must have worked well, because by the time A’shanti was in college, she “was a full-on political junkie.”

Upon graduating, A’shanti furthered her involvement in the Democratic Party, eventually being appointed by President Barack Obama to serve as Special Assistant to the Secretary in the Office of Public Engagement of the U.S. Department of Labor. Today she’s involved with many organizations: working on BGG, as well as being a political director for Emerge America, and a leader at the 2020 club, a criminal justice reform organization.

Based on her wealth of experience working within various political organizations, I was curious to ask why she’s moved her activism into the realm of podcasts. She believes that, “podcasts are a great medium for political activism because you get to hear directly from the people doing the work.”

Podcasts are innately personal, allowing listeners to be inspired from a variety of perspectives with a variety of political goals. A’shanti says, “this can be elected officials, candidates, organizers, and activists who are telling their stories about issues, policies, and campaigns that are important to them and drove them to take action.”

But the benefits of podcasting aren’t without their drawbacks. “The hardest part has been learning how to podcast as there is so much that goes into it – the recording, the editing, the promoting.” Luckily, A’shanti is working with audio-first media company, Wonder Media Network, which she credits for why BGG is “so professionally done.”

BGG is a new podcast, so looking forward to the future of the show, A’shanti is mostly excited to keep recording new episodes. A’shanti says that Interviewing each guest about their particular political paths feeds her soul, and she hopes that her show has the same effect on her listeners.