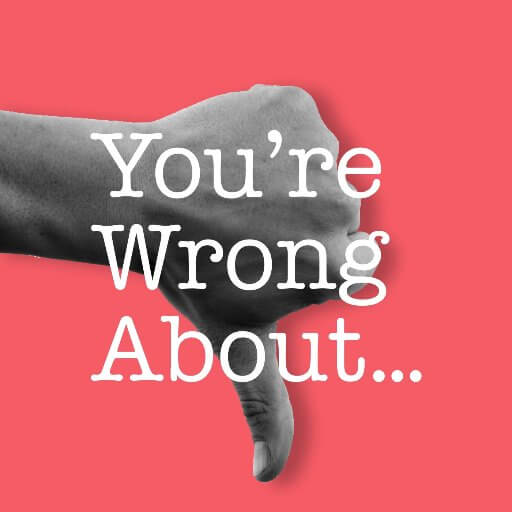 History has blossomed in the age of podcasts. There are shows diving deep into specific eras like The History of Rome, or about weird histories that your textbooks never covered. But there’s a whole other category of history that most podcasts avoid. Historical events that are presumed to be common knowledge like, Roe v. Wade, Monica Lewinsky, or the Exxon Valdez oil spill. There’s a popular sense that we don’t need to cover these topics, because we already get the gist. But how much do we actually know?

On their podcast You’re Wrong About, journalists Michael Hobbes and Sarah Marshall are here to remind you that you know less than you think. That the popular narrative is never the complete one, and the people simplifying that story are usually have ulterior motives. Or as Sarah puts it, “humans become players in a narrative, and often one pre-ordained by the needs of a network or a hungry public.”

As exemplified by her 2014 essay attempting to “reframe Tonya Harding’s legacy,” Sarah told me in an interview, “I tend to write about stories where an initial wave of media obsession has drowned the complex humanity of the people involved.”

Michael’s writing shares the same values, so the duo almost feel destined to work together, but it took many years for their collaboration to come to fruition. The two journalists were looking to collaborate on a podcast as early as 2016, but they couldn’t quite settle on an idea. Finally, in early 2018, Michael pitched Sarah on a “dream project” that would eventually become You’re Wrong About, “a podcast revisiting misremembered history”.

By March of 2018, the duo begin recording demos to fine tune their formula. They scrapped their first recording about Y2K, but their second episode about the 1980’s Satanic Panic became their first official release. Since then, Michael and Sarah have continued to tinker with the show’s formula. Sarah says that, “as you listen to the show, you can hear us figuring out how to make it.”

Our hosts have learned how to record their show, but there’s one aspect of creating You’re Wrong About that Michael and Sarah learned years ago – research. Sarah says that she can’t speak for Michael, but her research methodology is time intensive. She requires at least three weeks with a topic before she, “feels ready to talk about it.” During those 1.5 fortnights, Sarah spends her time, “read[ing] and watch[ing] all the contemporary media [she] can find.”

But Sarah says that in an ideal situation, “we can do an episode on something I’ve been thinking about for a long time.” She cites the recent episode “The Preppy Murder” as an example. She’s known the case details since she was 15, and has been thinking the case’s “strange gender politics” ever since. That episode perfectly encapsulates the show’s premise, as it’s a story that Sarah thought she knew, but needed to dig deeper to fully understand.

By casting a new light on these public narratives, Sarah isn’t trying to be impartial. “In the broadest sense, I would call it a show about justice.” She says that retelling these stories is her attempt to, “feel some sense of connection or allegiance to the people I’m talking about: My goal is not to defend their actions, but to cultivate empathy with them, and therefore invite listeners to do the same.”

You’re Wrong About is essentially aiming to rewrite the history books with a more holistic perspective. The gravity of this goal is not lost on Sarah, as she says that, “it’s scary to feel any sense of responsibility for people’s perceptions of the world.” Being a journalist, this responsibility is not new to her but, “there’s something about [You’re Wrong About] that makes that more immediate, and humbling. When someone tells you that you have enabled them to think differently about an assumption they’ve carried for a long time, you take that power very seriously.”

Sarah’s burden of responsibility is stressful, but it’s also a source of joy. “We are also continually humbled by the thoughtfulness and insight and compassion of our listeners, who make each week’s release feel like a dialogue. It’s hard to feel such a great sense of responsibility to both listeners and figures from the past, but it’s also, more than anything, a privilege.”

Looking forward to the future of the show, Sarah has no idea what will happen, which is, “a very exciting thing to contemplate”. So far she’s felt proud of what her and Michael have accomplished. “People have told us the show feels compassionate and kind to them, and helps make the world feel kinder and better to be in, and makes them stretch their empathic powers.This is what I’m keeping in my mind as we move forward: More Kindness.